Corten steel is a rusty steel widely used in architecture and design. Brown-orange in colour, corten steel reaches its mature stage in around 1 to 3 years. Discover the characteristics of this self-protecting steel. We will explain how corrosion is formed and why your panel is delivered without rust.

Generally we all try to avoid rust on the steel products we buy. Synonymous with poor maintenance or even fragility, rust does not inspire confidence once it sets in. In certain sectors, stainless steel is also favoured for its stainless qualities, which doesn’t require the application of a special process.

But sometimes, rust can add a little aesthetic touch to a project. Corten steel is also very popular for design projects.

We’re going to tell you a little more about this naturally rusty and durable steel:

What is corten steel?

Corten steel, also known as korten, is a steel with a rusty appearance that has very aesthetic qualities and is being increasingly used in design. It is found particularly in building (architecture and construction), in public spaces (street furniture) or to make upmarket works of art, signs, chimineas and fire bowls.

Corten steel is a brown-orange steel. The coloration is due to the self-protecting rust layer that naturally forms over time. Once it has matured, this layer of metal oxide is called a « patina ». Corten steel is a metal that changes over time under the influence of atmospheric conditions. Due to its chemical properties, rusty corten steel is also known as weathering steel and self-healing steel. How does corten steel rust?

The composition of rusty steel

Corten steel is a steel with added phosphorus, copper, chromium and nickel-molybdenum. These alloys increase the corten steel’s resistance to atmospheric corrosion by creating a protective patina on the surface. This patina usually forms in 1 to 3 years, depending on the environmental conditions and the alternation of wet and dry periods that help the patina adhere. Due to the presence of phosphorus, this protective layer regenerates continuously on the surface and forms a barrier against moisture, oxygen and pollution.

The formation of the patina

On conventional steels, rust forms on the surface of the metal sheet with moisture and air. When it dries, this layer of rust becomes porous and detaches from the metal leaving room for a new cycle of rust to weaken the metal.

The rust process is exactly the same for corten steel, except that it doesn’t regenerate itself. The addition of the alloys mentioned above produces more stable rust that adheres better. The succession of wet and dry periods acting on corten steel thus produces corrosion on the surface until a layer of resistant and protective metal oxide forms. When this layer matures, it no longer gets any marks and makes the steel less permeable.

The orange-brown coloured patina that forms this way is not perfectly consistent all over. Bad weather can also slow or disrupt its formation. For example, sea air does not create an effective protective layer. The high concentration of corrosive products in this environment prevents the rust stabilising.

The patina matures in 3 years maximum all by itself. It gives corten steel a grainy appearance and different shades often accentuate its aesthetic appearance.

Example of a head: milled corten steel in the process of oxidation Why does my corten steel come without rust?

Corten steel is quite easy to work with for all types of projects. It can be sheared, punched, folded and laser cut. Corten steel panels are sold as milled steel so we can avoid damaging the laser head during cutting. On arrival, this means you can assemble projects by welding or screwing several metal plates together. Please note that if you want to solder corten steel, you will need corten-specific MIG solder wire.

Natural corten steel allows you to be creative. You can control the process and slow down or accelerate the appearance of the patina. It is even possible to completely prevent the corten steel oxidising with an anti-rust coating. So you can blend oxidised areas with non-rusted areas to create original designs. Appearance of corten steel at different stages of rust formation

See you soon for new tips,

How to clean an Aluminum Splashback ✨ 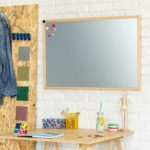 A magnetic board to magnetize all your photos 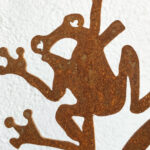 How to accelerate the corrosion of corten steel?

No more than 1 email per month, only the quality!

Join our community of Steelsters